I’m working on an exciting new geegaw with a business partner and old friend in Seattle. It’s a 3D music visualizer built in HTML5 / WebGL using PureMVC, React, and Three.js. We already have a solid, extendable client framework, and some great stuff going on in the rendered scene, which the user can customize and then save. 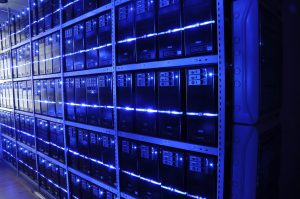 Our original plan was to render the saved project on the server with Node.js, render-farm stylee. That would allow us to ensure it played smooth and didn’t stutter due to unknown client load and/or capabilities. Should be a snap, right? Er, no.

If you’ve researched this topic to any degree, you probably already know that there’s currently no out-of-box, miracle solution to make this happen, and certainly no example lash-togethers that will absolutely give you the same rendering on the server as you see on the client. If there is, and I’ve missed it (or if one comes along months from now), please let me know in the comments. For anyone else who may be trodding this path, her face sullen, set, and grim.

What’s wrong with rendering on the server?

Wait a minute. Am I certain this is the only way to go about this?

It is at this point in my research that I begin to question all of the dependencies and potential hacks required to pull this off, and whether it truly is The Right Way(tm). I don’t take on project dependencies lightly. My little test project for figuring this part out had only the following top-level dependencies:

But a quick peek into node_modules shows (…OMG…):

Yikes! A hundred and eighty seven packages already? That’s a lot of independently maintained places for this to fail. A lot of roads to dependency hell.

What are the pros and cons of trying to do this client-side?

Alright. I’m convinced that exploring the path of client-side frame rendering with server-side video encoding is worth giving a try. I’ll get back to you in another post with what I find. In the meantime, if you have anything to weigh in with, please hit me up in the comments section below!

A good point was brought up on the Dzone comment thread: Am I not worried that I’d be trading CPU cycles for bandwidth in the charges from our cloud provider by going to a server side assembly of images with client side rendering. For us, this would be an issue if we’d stuck with our initial intended provider of AWS. However, after recent great experiences with Google’s Cloud Platform we looked into it and discovered they offer free ingress traffic.

So, in short, we’re still fully committed to exploring this architecture and have already had some success with the microservice. I’ll be writing about that shortly.

The benefit of blogging about it as we go is that we get a chance to pass on some of our thought processes as we navigate the hurdles and potholes strewn along our path. Getting those thoughts down while they’re still fresh in mind might guide someone else following a similar path. If we fail owing of these decisions, maybe it’ll help you avoid your own smoking crater. Either way, later on, we’ll be  busy chasing different squirrels in some other park.

The next article in this series is: Creating Video on the Server in Node.js

8 thoughts on “Should I Render Three.js to Video on the Client or Server?”