Historical use of the English phrase “Am I Right”

Google has some great free tools, am I right?

With image search alone, a writer can learn a location well enough to describe it in vivid detail. We can thoroughly research the intimate practices of businesses and religions. Get the inside scoop on cults, cartels, and contract killers. Everything’s out there, but sometimes, if you’re like me, you probably feel the need to enter: “Hey, if you’re listening, you do know I’m just writing a novel, yeah?” in the search box.

Anyhow, today, my character (a British military deserter in 1945) was about to utter the line: “Too bad the same can’t be said for the letter, am I right?”

I’ve heard “am I right?” tacked onto the end of a statement as a rhetorical call for concurrence for years. More so in New York than here in Tennessee, though I’ve heard it here as well.

But would my character say it?

When I have this sort of question, I turn to Google’s Ngram Viewer.

All those books Google scans in are not just turned into searchable text, but they’re analyzed in other ways as well. One way is extraction of n-grams, or phrases.

“Am I Right” n-gram, British English

The above search for the phrase “am I right” showed a steep spike in usage between 1980 and 2000.

However, if you notice in the screenshot, I’ve chosen the default corpus (for my location) of English.

That is a combination of American English and British English, which are also selectable independently.

“Am I Right” n-gram, American English

If you inspect these two graphs, you’ll notice the y-axis is scaled to fit the data, and the while the highest value for British English came in 2000, it was also in .000008% of text searched.

That’s less than halfway up the giraffe’s-neck curve between 1980 and 2000 for American English.

So the likelihood of my British military deserter ending his sentence with “am i right” may be quite low.

I can click through to see my n-gram of interest highlighted in the texts from various periods, and I can adjust the range of the graph to a specific time period if I want. I can also enter several phrases, separated by commas, and see them plotted in different colors on the same graph.

Another window into this data is the define keyword in Google Search.

I wanted to know if the same character would refer to clothing as duds. Enter the phrase “define duds” and you get not just a definition, but also word origin. The sense of “an item of clothing” comes from Middle English; check. And a similar chart shows us that 1945 was a peak time for that term. Although it could also have been in the sense of “a thing that fails to work properly” — in particular, a bomb. 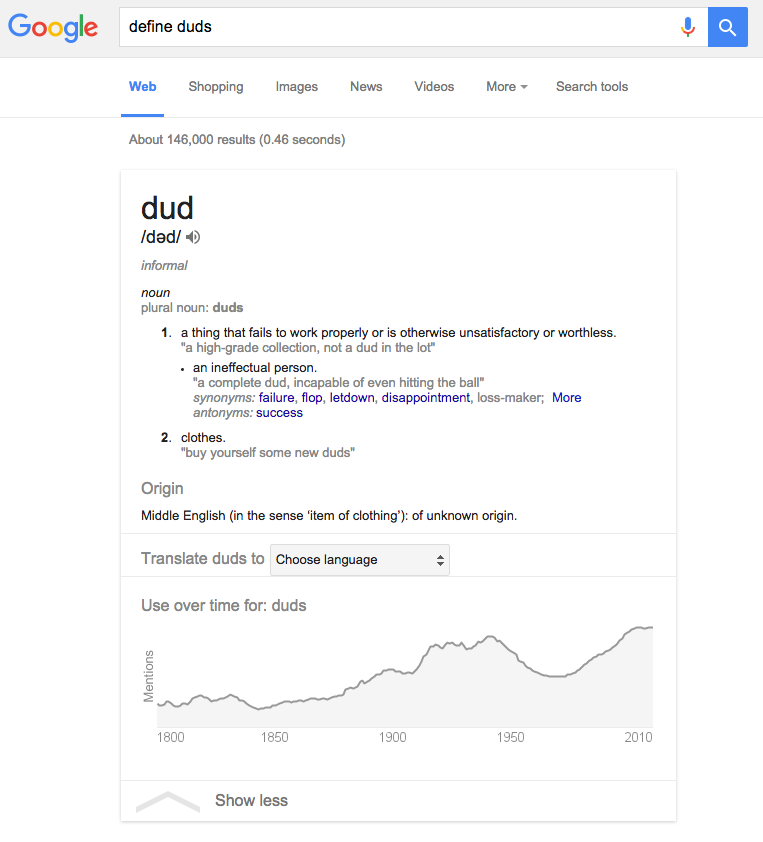 Finally, clicking the graph embedded into the search result takes us to — surprise! — the Ngram Viewer query for that term, where we can narrow it to British English.

Nice, am I right?

Do you use Google’s Ngram Viewer and Define keyword? What do you think of them as research tools?