When writers include real places in fiction, they now have more tools than ever for making sure they get the description right. Services like Google Maps & Street View, Bing, Flickr, and countless others make it easy to catch glimpses of your target location from many angles. Without ever having been there, theoretically, you should be able to craft a scene with verisimilitude that even a native of the area would find consistent.

But what happens when our shared digital representation of the world fails us?

I recently ran into a wrinkle in the Interweb’s brain where this happened to me, and the answer was: Find some eyes on the ground.

A man with one watch always knows what time it is. A man with two is never sure. 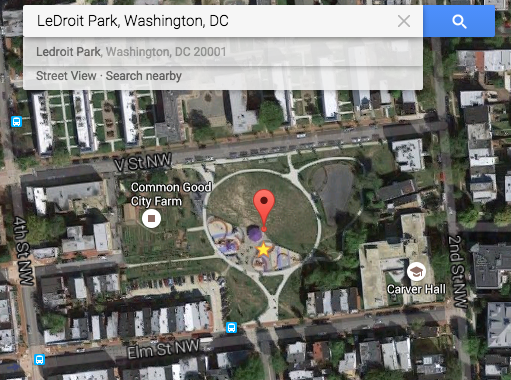 The scenes in question take place in Ledroit Park, Washington, DC. That’s a neighborhood. There is a park in the middle of it called (go figure) Park at Ledroit.

My goto tool for location scouting is Google Maps. I’m not saying it’s better than all the rest, only that it has, thus far, been more than adequate for my needs.

So, using Google’s Maps and Street View I gathered enough info, wrote the scenes, felt pretty good about them, and moved on.

Later, I it occurred to me to make sure that the gang that beat my character senseless could reasonably be expected to exist in that neighborhood. It’s fiction, but I still want to reconcile as much of it with reality as possible. If this area were sufficiently gentrified as to make it a ludicrous proposition, then that’s worse than getting the visual details wrong.

I found myself researching crime (spotcrime.com made it seem that a gang wouldn’t be that much of a stretch) and house prices in the Ledroit Park section of the nation’s capital. On some housing website, they embedded maps from Bing, a service I rarely use.

I decided to explore Bing Maps a bit and see what features it had to offer.

Which came first. the park or the school?

In order to see how up to date Bing’s images were, I went to Park at Ledroit, a location I’d spent a lot of time looking at from different angles. Imagine my surprise when I zoomed into the park and found a school! Or at least what looked like one. It certainly wasn’t the open park where my character’s girlfriend often walked her dog and across which, one night, he dashed, chased by thugs. Nope. Not that at all.

Comparing the two images, the school and its surroundings looked quite new, while the park and the same surroundings looked old. It appeared that Bing had the newest map (at one zoom level; the rest looked similar to Google). And logically, who would tear down a school to build a park? It happens the other way around right?

Something like this had already happened. The little park across the tracks from the Department of Homeland Security is now called Hancock Park on Google Maps. Previously, when I mentioned it in my book, it was Boxcar Willie Park. Such a shifty place, the universe.

Anyway, I was prepared to move the scenes from Park at Ledroit to some other location (fictional or otherwise), but wasn’t looking forward it. (In the software world, this is known as dependency hell. It is why you should write code with the least number of dependencies, and for those you must include, be relatively sure they’re mature and unlikely to change. But I digress.)

Since the Park at Ledroit is a small part of Ledroit Park (thanks universe for the irony), it was difficult to find specific pictures of the park itself on Flickr and other image services. I got neighborhood pics.

I read all the meeting minutes of the Ledroit Park Civic Association, looking for mentions of “the new school” or “the park that was torn down.” Nada.

Eyes on the ground

Ultimately, I contacted the head of the Civic Association by email, presented him with my plight, and he was happy to inform me that the school was gone years ago (so much for Bing having up-to-the-minute data), and that the park was alive and well.

The moral of the story is that things change, and when writing about the real world in a fictional setting, your work can easily become outdated if tied too closely to the physical environment. But fortunately, it is easier than ever for us to update our works, even after they are published. In this connected era of lurking and surveillance from afar, don’t be afraid to reach out to an actual human who can tell you what’s really happening out there.

2 thoughts on “Eyes On the Ground”