The Ending: Sweat this above all.

So, you have crafted a terrific book with an engaging plot, memorable characters and settings, and prose that flows like honey.

But after asking a reader to spend several hours of her valuable time with your characters and their ordeals, delivering an unsatisfying ending would be a deeply-felt affront.  Particularly in this Information Age, when she has begun to realize that her time is worth something, even when she’s not “on the clock.” 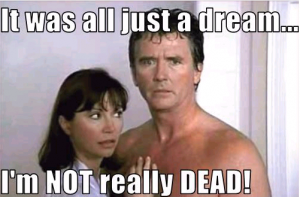 Don’t let a bad ending be all the reader remembers about your story.

As a reader, the ending is what I most critically judge a book by, and unfortunately, I have to read the whole thing before I can make that call. Therefore, if you screw it up, it’s unlikely I’ll give you a second chance. Not on the next novel of your series, not on your next short story, not even on a blog post. Maybe readers at large are more lenient, but I wouldn’t count on it. No writer ever owed his success to overestimating the public’s ability to forgive and forget.

Writing a novel is a tremendous effort, and after building up to and finally delivering the awesome climax of your book, tying up the loose ends might feel like perfunctory business – the drudge work of the book. That denouement, or “wrap up” is where we get all the subplots hitting their final targets. Did the happy couple eventually get married? Did they ever find their lost puppy? The answers to those questions may seem utterly insignificant in the face of whether they escaped the clutches of the powerful demon Blargamemnon, and managed to make it back to Earth from his lair on the seventh level of Hell. But if the reader was made to care about those questions over the course of the book, then not answering them because you think it will steal the thunder from your climax is inexcusable.

The Value of Your Readers’ Time

When you think about whether your book is worth the selling price, consider that the reader is actually paying more than that: They pay first with their cash, and again with their attention.

Just for kicks, let’s do a little calculation: Take the median wage of your target reader and multiply by the median time required to read your book. Then multiply that by the size of the audience you want to reach.

I’ll go first: $25 x 5hrs = $125 = value of time spent per reader. Lets assume a 10k audience (audacious, but I say “aim high or put that thing away”). 10,000 readers x $125 = $1.25 million! That’s not money in my pocket, but the time they fritter away with my characters could be unquestionably be better spent curing cancer, helping the homeless, or any number of nobler pursuits. If I held them all the way to the end, then I owe it to them to deliver a satisfying conclusion.

What Does a Great Denouement Hold?

The climax wraps up the central question of the book, for instance: Will the goodies beat the baddies, and how? This is what everything has been leading up to. All the subplots, while raising different questions, will (ideally) still support the central question in some way.

On rare occasions, the climax is at the very end because all the questions have already been answered, or are dealt with in the climax scene itself. A good example of a story ending with the climax is Thelma and Louise. The gals go over the cliff and that’s it. Everything is wrapped up in a grand and satisfying finale.

To give richness to our characters and themes, we add sublots along the way that have to be resolved and usually, due to the immediacy of rising action, they aren’t dealt with until after the climax.

In Stephen King’s The Stand, the climax comes when Trashcan Man sets off the nuke that destroys the evil camp in Vegas. But we still need to know, among other things: What happened to the baddie, Randall Flagg? Will Frannie will have her baby? If so, will it be immune to the plague? Does the world have a future? (Spoiler alert: it does!) Frannie’s baby is just fine, and Flagg seems, for now, to be out of the way, but he is alive, leaving the door open to a sequel (hint, hint, Mr. King…).

By definition, the denouement will not be as explosive as the climax. But does it have to be humdrum? No. It needs to move along as quickly as possible, though, because after the climax, the rising action is over and the page-turning, edge-of-the-seat feeling wanes quickly.

If the answers to the lesser questions raised by the book are as simple as, yes the happy couple gets married, and yes, they find their puppy, it might seem desultory. The questions are answered, but they contrast so much with the climax, that the arcs they serve had better have been strong ones that have set up a yearning for closure.

A truly great denouement will not just wrap up subplots, but provide a completely new perspective on the story and its themes. Serendipitously, after finishing the first draft of this post last night, I watched an episode of House of Cards with a powerful ending, the best one so far in Season 4. Cover your eyes and skip the next paragraph if you’re worried about a spoiler.

In this episode, President Francis Underwood and his wife Claire, are having personal problems stemming from her actions as a UN ambassador in Russia, where she botched his peace plan. Already they’ve been drifting apart. Work separates them, and they’ve been sleeping in different rooms since he became President. They are the main characters we care about in this show, and to see the rift between them deepen is particularly painful. At the beginning of the episode we see them renewing their wedding vows, but it seems a facade for the press. During the course of the episode there is a group of Tibetan monks who are creating a beautiful sand mandala in the foyer of the White House. It takes them about a month to complete, so the peeks at their progress act as a clock showing us the time that is passing. At the end, Claire spends an hour watching them and is amazed by their work. The two of them have a discussion where they both realize they need to fix things between them but neither knows just how. She relates how they hadn’t even had time to comment on this beautiful work the monks were doing, something they normally would have delighted in sharing. Flashbacks through the episode show them preparing for their renewal of vows, contrasted with cold, tense situations afterward. Francis was away when the monks finished and, as is their way, they had a little ceremony and swept it all up into an urn, which was then poured into a river. Francis comes back in and sees that the mandala and the monks are gone and his security man informs him of the situation and says he thinks someone took a picture. Francis asks him to track down a copy. He frames it and places it on Claire’s bed, where she finds it and reads the note, which says “Nothing is forever… except us.” She goes into his room and slides into the bed with him for the first time since they took office.

Not only do we find out the answer to the question Will they get back together? it happens in a powerful way that resonates with the juxtaposed themes of impermanence and the eternal bond of marriage.

Have you noticed how hard it is to find a standalone novel these days?

It seems everyone is writing a series. A friend of my wife got a contract for three books from a publisher, and her advice was to have at least two books completed before you query anyone. Apparently, the current generation of readers isn’t content to wait a year or two or ten between books, so publishers want to strike while the iron is hot. If a book sells, then they want a sequel waiting in the wings, ready release as soon as possible. That said, lets think about the extra burden of ending a series book.

In a series, you really need to pull a rabbit out of your proverbial hat with every installment. Leaving enough hanging to demand a sequel while tying up an adequate number of loose ends to be satisfying – in as little time as possible after the climax – is tricky, to say the least. Then that final book needs to deliver big-time, considering the value of the reader’s time that’s you’ve pilfered thus far.

In my current novel (the first in a series), there is a lot going on, but I poured buckets of sweat getting the ending right, and thus far, my beta readers seem to agree: it paid off.

During a drive-by invasion of Earth, three people are taken aboard an alien craft, handed an artifact that gives them some unadvertised abilities, and told about an even graver danger to Earth. Then, they are returned. The government catches wind of their trip, covers up the discovery, and sets about hunting them down to find out what they know and if they are a danger. The climax of the story deals with the government conspiracy / manhunt. In the first draft, the meeting with the aliens’ “sapient liaison” was included and the reader got to hear everything the characters did about the danger to Earth and what the artifact was. I thought that would make the stakes seem higher. But during the second draft, I realized the stakes were already high enough with the manhunt and them learning to use their strange new abilities to save their skins. By dropping that scene, the reader is left wondering the whole time just what the devil the “graver danger to Earth” the characters keep alluding to actually is. There were other loose ends to tie up, of course, but saving this particular reveal for the denouement allowed me to still have some bang left at the end. Bang that demands a sequel. And further, the sapient liaison on the alien ship (whose own plight is a thread to be tied up) has discovered the extent of the treachery among his own kind and that even he was duped. In addition to the graver threat just revealed, there is an even more immediate and graver threat still. When his scene ends the book, there is another, bigger bang. A double-bang denouement!

In short, try to save some bang for the very end – not just the answers to questions raised, but truly unexpected reveals. Find a way to hold something back that totally changes the reader’s understanding of the story they’ve just read, and that, in a series, makes them realize that they’ve only just begun.

1 thought on “On Endings”