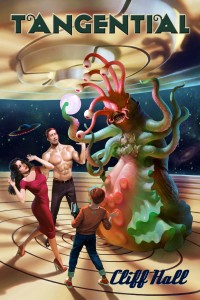 In December of 2012, I began to rework what had been a two-thousand word short story into something much, much larger.

That original piece, a mildly-humorous alien invasion yarn, was called “Once, Upon the Dark Matter Highway.” It was basically an elaborate setup for a zinger punchline. The kind where the drummer in the corner goes bah-dum-tshhh! at the end.

Some friends of mine read it, and I got several responses of “Will there be more?” and “What happens next?” Not what I expected at all. The story was never more than a joke for me, albeit one I put a ton of time into revising and compacting, since it was meant as a submission to some writing contest or other that had a strict word limit.

So I sat down one night and asked myself, “What might happen next?”

I reframed the tale as an alien invasion / government conspiracy thriller. Forget shooting for yuks; the laugh-a-minute pace I’d hoped for hadn’t emerged in the short story, and I wasn’t about to keep up the pretense for the length of a novella or – dare I imagine? – a novel. Nearly all of the original story had to go or be rewritten entirely, anything that didn’t serve the new plot was taken out to the woodshed and spanked like a red-headed stepchild or simply shot dead and buried.

On New Years Eve of 2014, a little over a year later, I finished the first draft. And the book had a name: The Sagittarius Protocol, although later that would be changed to Tangential to focus on the tangential timeline premise that emerges. The point is, it was a complete novel! Moreover, there was a second book mostly plotted, and a third book brewing in the mind-mapper. The Dark Matter Highway series was born!

For the first book, I knew the appropriate tone, the complete story arc, and the arcs of all the characters. I knew where it was winning, and where it still needed some funky music to get its ass up off the couch. That first draft was about 165k words long. From there, I sat out on a quest to even out the tone across the book and smooth the story and character arcs.

By February of 2015, I’d finished the second draft. It was looking much more like a book someone might enjoy all the way to the end. More importantly, I knew it was one that I would enjoy myself, once I finished it and had enough time away that I could read it without editorial glasses on. The major ripping up of the roadwork was done, the Highway repaved. This second draft was little over 200k words, almost an eighth larger than the first. But the characters were deeper. The aliens, completely rewritten, were no longer just showing up to eat people. They had their own realities to contend with. And the ending was a satisfying resolution to the action of the book, while at the same time leaving a definite mandate for the larger story to continue.

Near the end of the previous revision, I’d learned a few nifty tricks to deepen the POV (Point of View) of the characters; to keep you deep inside their heads and looking out their eyes rather than merely watching them and eavesdropping on their thoughts as they move around on the stage. I wanted to apply those evenly throughout the book, so I began a third revision pass, and two months later, I’ve made it a little over a third of the way through the process. I’ll be writing more about POV deepening soon.

Also, for this revision, I decided it was time for another set of eyes.  Critical, unforgiving eyes.

I was fortunate enough to engage the services of the inimitable Jefferson Smith to bring out his big guns and blow as many holes in the story as he could. I’d been on the lookout for a content editor the whole previous year, since becoming convinced that it would really be a book someday, and had become a huge fan of Jeff’s Immerse or Die review series. I knew his merciless, but well-reasoned feedback was what the book needed; a new perspective at story architect level. And I can tell you it was money well-spent — highly recommended. Several problems have been already been addressed, and more are under way as I continue with the third draft. While we don’t necessarily see eye-to-eye on the solution to every problem, we work together to find something one that fits this story while also servicing the series arc. That’s exactly the type of editor you need to make your writing become what it was meant to  be: true to your imagination, but strong enough to carry that vision, lock,stock, and barrel, into someone else’s mind and own their attention for the duration of its reading and then some. Aim high or put down the gun.

I decided to post the story on Amazon’s new Write On community as I proceed with the third revision pass. I’ve gotten some useful feedback from other readers and authors there, and I think it will blossom into a vibrant community as they roll out more useful tools.

This pass will (hopefully) yield a draft ready for line-level editing and proofing, which I’ll gladly hand off to professionals. Famous last words, right?

EDIT: Several years later, and Write On has gone the way of the dinos. Apparently coddling a fledgling community of writers wasn’t profitable for Amazon and they shut it down. Anyway, It got great reviews there and that encouraged me to press on and create the book this story wanted to be. Check it out on Amazon!

1 thought on “Turning a Short Story into a Novel”